A bit about Samsons Joinery 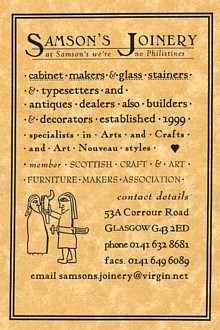 Samson's Joinery was started by me, the eponymous Ross Samson, MA Hons, PhD (probably the only communist carpenter in Glasgow with a doctorate). After twenty years as a medieval historian and archaeologist, having written over twenty academic papers for journals and books (you may remember me from such classics as "Economic anthropology and Vikings" or "The rise and fall of tower-houses in post-Reformation Scotland") and run my own archaeological publishing business, Cruithne Press (responsible for titles like Material Harm: archaeological studies of war and violence and Indecent Exposure: archaeological studies of sex), I decided on a change. With acute business acumen, I realised that bespoke cabinetry and antiques restoration would easily halve my already meagre salary but at the same time allow me to work even longer hours. I jumped at the opportunity.
Unable to shake my scholarly inclinations, I read extensively on the Arts and Crafts movement (roughly 1880 to 1914) and am now a font of useless information which is rarely of interest to anybody (not that this stops me passing it on). The visual aesthetics of the Arts and Crafts have always appealed to me. The decorative elements of Decorative Arts seem infintely more beautiful than the clinical industrial lines of contemporary design, yet remains sufficiently simple and plain to suit modern tastes. 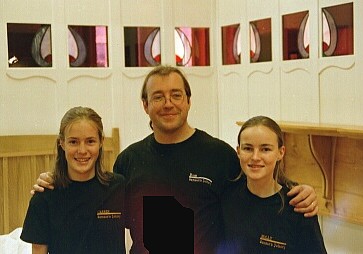 The movement's ethos of cooperative guilds and the honesty of labour similarly appeal to my socialist sentiments. (I spent half a year behind the Iron Curtain in younger days.) By necessity, I have to make almost everything myself or work closely with other craftspeople simply because much of the semi-industrial production available to the designers at the time of Ashbee, Voysey and Lethaby are long gone. For example, one fireplace involved over half a dozen people. The client herself visited a specialist antiques dealer and found a copper hood. A ceramicist designed and made the tiles; a tiler fitted them and built the fireplace and hearth. I designed and partly built the wooden surround with help from an assistant. My wife and I designed copper plaques which were made by an artist, while my wife made the stained glass panels. The timber came from a tiny sawmill that uses local windblown trees. From start to finish the project was environmentally sound and involved only self-employed workers, yet cost less than a comparable fireplace and installation from a high street fireplace shop.
Such a project is not finished in a week. Even straightforward commissions from us will take what seems ages. But not only will friends marvel at your handsome new addition to the home, knowing how it came to be built will give you the warm satisfaction that you have made society and our world that little bit better.


Postscript. Did I mention that we plant trees?